If any potential home educator would like a copy I’d be happy to email it on request. She seemed to really like it (saved her writing anything down) and she was really great. Said her best home ed kids didn’t even use books but learnt by doing using tv and computers. She was a bit surprised at him teaching himself languages and the fact that he did maths every day cause he loves it!

Laurie was a total star and said he liked it because he could set his own timetable and concentrate on work in the morning. he said it was good because once he’d finished the work for the day he could play. he said it was better than school because he got teased at playtime at school and they called him a girl.

He also said that we made a good team at home (aw bless – I didn’t prompt him either!!!). He said that was because of the balance of subjects that we were all good at. He told her I spend too long on flickr (oops) but she had seen his fab mosaics and was well impressed by his artwork. He showed her some of his home ed work and pointed out that he liked symmetry in his art.

I watched him as an outsider might see him. He was like a different child than the one I saw two months ago. He appeared confident and happy. My god if only she knew where we’d been lately…

Anyway – not expecting any problems there.

Still waiting for the official response to my letter to the special needs woman. That will be interesting.

here is one of Lauries home ed photo projects called blue & red – the home ed woman really liked it and it made it to explore really quickly. 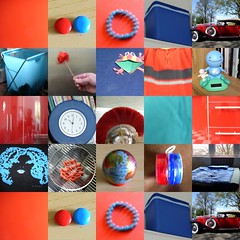