>wow – the visit to the new school went really well.

Laurie was really positive and the environment felt very gentle (despite being in one of the most deprived areas of Glasgow). The staff were fantastic and we had a really useful conversation about a plan for integrating him into the school.

The school only has 100 pupils (instead of the planned 400) so there is lots of space and quiet areas. Laurie went off with his teacher and met his new class. There is a boy with tourettes syndrome who looked after him. They had a great time. There are only 16 others in his class. maybe this could work…

So here is the plan…

instead of a slow transition we are going for a full time start (due to his positive response) from… tomorrow!!!!!!

and where am I – stuck in a hotel bar in bristol, while Tim completes the preparations for the morning. We went out and bought new clothes and shoes, etc. he is ready in a practical sense.

He is a bit nervous but really excited and positive. I wont be home till Thursday night – so have a few days at work while I wonder what’s going on.

fingers, toes, and all relevant body bits crossed now! we are more hopeful but know that there will be some major blips. If it can work in mainstream school then this is a good try…

watch this space – we’ll see if we can ‘make school make sense’ (National Autistic Society Campaign). I gave them piles of information about children with aspergers and learning and tried to explain his sensory issues. now it’s over to them for a bit.

keep finding myself crying – a mixture of relief and apprehension and true admiration for such a brave kid.
how I feel today. best seen large – from a gravestone at the fabulous Glasgow Necropolis
melt… 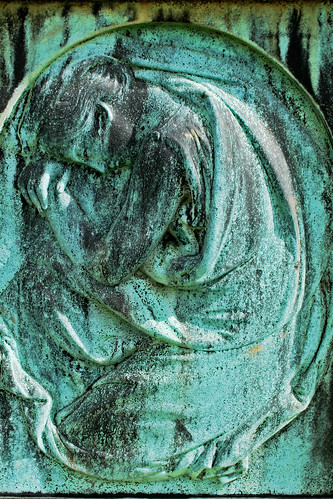 For what is it to die, but to stand in the sun and melt into the wind?
Kahlil Gibran