>some of you who read this blog are so amazing I’m stunned.

I never even expected people to read it but to actually respond and offer huge support and really really sound advice is way more than I expected.

yes we had a bad day on monday but generally we are feeling so much more empowered. we had also felt that we need external (legal) help as we are too close. we lost the appeal – as expected and have a strange lack of emotional reaction (still too bloody knackered I think).

tim’s reached a point where he needs to be off work. ironically I went back to work on tuesday (maybe a bit mad). my colleagues have been fab and really supportive. today was a bit tiring as we had an event for my elearning projects and everyone was great and said they were glad to see me back – they’re probably wondering what the hell is going on.

they probably also wondered what the hell has happened to me. several more grey hairs and a general haggard look. actually coloured my hair before going to the meeting in an effort to tart myself up a bit. very half hearted effort.

what has surprised me is how tired I am. tim said it’s cause I’m up till 3 on flickr every night; ))

just as I would never change my son I would also not change what has happened. i’m not a creature of regret…

and I love learning.

i am definately going to find a lawyer. J the L if you have any suggestions great but if not I should be able to find someone. I am going to investigate the scottish legislation re educational provision with or without a diagnosis (thanks photopath) and if we don’t get a diagnosis we are going to pay for a second opinion.

so funny – tim now asks every day if anyone has responded to the blog – we do really value other input – it helps to keep us sane when we have a wobbly day.

haven’t got a wobbly day photo I dont’ think… pause whilst she goes to flickr to check….

he took a photo of tim and hector dancing (with an amazing capture of hector’s tongue- original is here http://www.flickr.com/photos/dramaqueennorma/143103583/) and I took one of laurie and hector lying next to each other. i went to make tea and when I came back he had coloured them and made a mosaic in picassa. it’s a bit psychadelic but has had a great response.

not bloody bad for a nine year old I think… 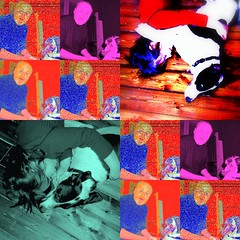