>thanks for all your comments guys.

we’ve been talking about what to do. still don’t know.

rang the psychiatrist this morning and asked her if she really thought it would be in Laurie’s interest (re his mental health) to go back to the school rather than try a new one. she’s with the others on this – they all think it would be better for him to go back. told her about the charming kids calling him names last night. She tripped out the usual – he needs to learn to deal with it – give him techniques. I sometimes wonder if they understand that you have a brain – der – we’ve been trying to give him techniques to handle bullies since he started school!!!

maybe I could do with some; )

my main concern is that one of the people assessing him for aspergers could advise me to take him to noisy places. What part of ‘it hurts my ears doesn’t she get’. I interpreted this as her either not understanding enough about the senory overload stuff, or implying that he’s making it up! tim was kinder and suggested that maybe they meant to de-sensitise him. I am aware that there are some therapies that may help but in a controlled and specially built environment. I hardly think a train station or supermarket counts as that. this is making me very worried about the help we are going to get.

rang the psychologist for alternative schools – on annual leave now and he is the only person who can advise. I’ve asked before anyway and he always says we’re at the best school. god help us.

have to ring the headmistress to arrange a time to visit the building today. tim had to go into work so we can’t talk it through – but this weekend we are going to have to make a definite decision – this drifting is killing me.

a few people have suggested getting signed off with stress. having a problem with this one (ms. I can cope with anything syndrome). do have to ring work though as I’m expected back next week – just need to get to the point where I can actually talk and not just cry down the phone.

my new camera arrived at last so here are my fab sequined shoes to help raise a few smiles. they look like magic slippers – two heel clicks and…. 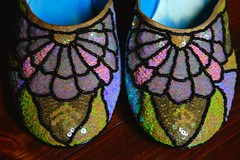