decisions have been made…

we will home educate Laurie till the end of June (Scottish end of term). I’ve just written the letter to the education service stating all the reasons that we feel the mainstream system just doesn’t offer an appropriate route at the moment. enjoyed writing that one as I also got to say exactly why we wont send him back to that school…

we went through a range of options to get through the next few months (nanny – too expenisve) (au-pair – very close second choice) (fabulous next door neighbour who knows us and our son and is studying for exams).

the latter is our choice. she will cover whilst I’m away from home.

Tim is a qualified teacher so we will work up a curriculum. He is so bright that
a) he probably doesn’t need a curriculum
b) he teaches himself from the internet, cd roms and the history tv programs
c) we got some practical workbooks for his age range and it takes 2 minutes for him to complete a section!!!

Also planning to enrol him in a local KUMON education centre – recommended to me by a mathematician. Uses a japanese method of teaching and doesn’t appear to require group work and encourages independent learning.

tomorrow we go to the appeal meeting re the exclusion – should be very interesting. my written submission would stand on it’s own but we are going in person too. will have to tart myself up a bit – looking a bit grey and haggard – I wonder why????

I am thinking of going back to work on Tuesday. Not sure I’m ready but feel that I should get on with it (especially as I know things will be OK when I’m travelling). Working may way up to that one.

We went for our final diagnosis re the spectrum but have to wait until they’ve seen him with peers!!! This will happen tomorrow as I managed to get Laurie back to the after school club ( the one with the woman who understands autism but can’t mention it due to pressure from the witch) the Psychiatric team informed us that they were seriously considering a diagnosis of Aspergers syndrome but just needed to confirm his interactions with his peers. Tim and I can’t really see that this will make a difference. we think it will just confirm what we have been saying about his interactions.

we then have to wait to get the grand result till first week in June.

probably no one listening anymore but I’ve been finding it hard to focus.

have done a whole series of high contrast black and white shots on flickr which make a set called autistic spectrum. each photo illustrates and has a description of one of the things that affects our lives.

Here is one of them which has been really popular. It illustrates the food issues ( restricted diet, being seen eating) and also issues of taste – re conforming to fashion – something my boy just does not do – kudos Laurie 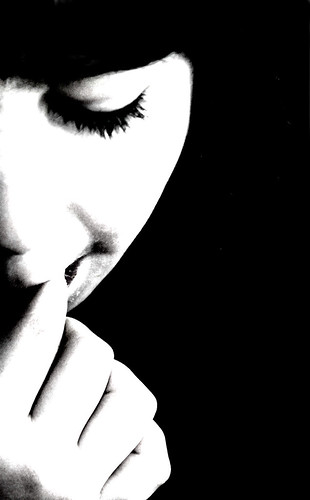 and the caption says ‘Sometimes it’s more important to be human, than to have good taste. ~Brecht