>We have been travelling this week. Yesterday me, Laurie and hector left Glasgow at 11.00am and went by train to Chippenham in Wiltshire. We were on the train, accompanied by loads of luggage for 6 and a half hours!!! No toilet stops for the dog and he was, as ever a star…There wasn’t much room under the seats so to stop him sitting in the isle he ended up lying across mine and Lauries laps. Didn’t get any work done as planned so just slept a lot. Laurie and the dog were brilliant.

Two photos to show them both being very happy…
deep joy 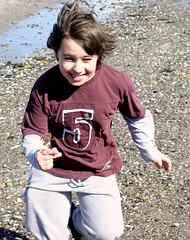 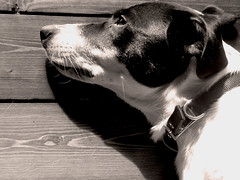 A dog teaches a boy fidelity, perseverance, and to turn around three times before lying down.
Robert Benchley

In Chippenham visiting my dad and having a chance to go into the office in Bristol. The boys all had a fab day. It was strange being back at work as I feel so distanced from it all so it was a bit strange. Shows willing though and everyone was really supportive.

Introduced a few more colleagues to flickr as well.

Not much time to be on flickr or the blog due to limited and expensive access to the internet. Getting withdrawal symptoms already.

Excellent news though – I’ve splashed out and treated myself at last to an slr digital camera. Bought it on ebay on Sunday so hope it will be there when I get back. More of my life lost to flickr…