>well they say you shouldn’t tempt fate – the bloody magic stick (sorry staff) has broken in two. the amber eyes stayed stuck in but it happened on the morning he was going back to school after the holidays!!!!

5 minutes before leaving he was swishing it around (tchew tchew) when hector the wonderdog ran into it and broke it right in the middle.

talk about tears – we’ve promised to stick it back together and bind it with some string etc., etc.

anyway back at school and doing fine!!!! yaaaay – still amazed.

he cried all the way there on wednesday because tim has gone away to korea for a week for work. aw sweet…

I’ve been totally barmy and as well as doing all the school drop offs and pick ups and dog walking and housework and cooking and my normal job – I’ve also been an online tutor for Oxford Brookes University. It’s a great course and I’m really enjoying it, but today I didn’t get to sit down at the computer till late and I was just too tired. will make up tomorrow.

I am always over committing myself – one of those really annoying natural volunteers. At least my colleagues at work try to stop me doing it now.

Ohh and watch this space as the National Autistic Society are launching the ‘Make school make sense‘ campaign in Scotland on 31st October. I’ve done my interview with the journalist and they may be taking photos of Laurie for the Glasgow Herald educational supplement next Tuesday and also for the Times Educatonal Supplement. Cool – we really get to support this really important campaign and Laurie says he’ll be even more famous!

I think his flickr celebrity may have gone to his head; )

and I’m also supposed to be writing 5 things feminism has done for me cause I received a blog meme from Nicki. Haven’t had time to think but did post this abstract photo which reminded me of a woman spinning and of stuff I used to read about women weaving communities and connecting things. Not in the sense of a spinning top which is often what I look like; ) 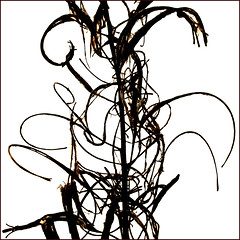