>Well I don’t think I’ll be able to keep up the ‘ings’ endings on all my posts but I will try.

I’m so happy because I finally have a tag cloud on my blog. I had to abandon the previous attempt and tried ZoomClouds instead. Much easier and done in 5 minutes so thanks for a great (and free!) service. I’ll tell everyone I know…

More later but I want to post this photo today as it’s my first photo to be viewed over two hundred times in Flickr. It’s called Way of Heaven and has a daoist quote attached to it. 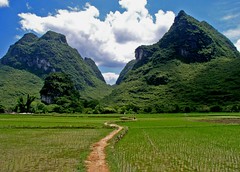 Once upon a time, I, Chuang Chou, dreamt I was a butterfly, fluttering hither and thither, to all intents and purposes a butterfly. I was conscious only of my happiness as a butterfly, unaware that I was Chou. Soon I awaked, and there I was, veritably myself again. Now I do not know whether I was then a man dreaming I was a butterfly, or whether I am now a butterfly, dreaming I am a man. Between a man and a butterfly there is necessarily a distinction. The transition is called the transformation of material things. (Chuang Tzu)

This was taken in Yangshuo in China during a great trip last August. It has the bright paddyfields in the foreground and the dramatic karsts at the end of the path. I like the path which ties in with the daoist concept of ‘the way’. I also like the way that it leads you beyond the picture to whatever lies behind the karsts.