because everyone agrees he has to go to school –

‘the longer you leave it the worse it will get’

well I don’t even think I should be sending him back. we’ve had a few big wobblers in the last three days as he starts to anticipate the awfulness of it all. we keep trying to encourage, cajole and outright lie!!!

why am I going to try it – I don’t even know. Pressure – the threat of prosecution? A tiny spark within me that thinks it may just be OK.

The plan is that Laurie and I will go in a bit later than 9.00 and talk to his two teachers. the educational psychologist will talk to the witch headmistress after lunch about a plan for a gentle re-integreation ( a bit late as we already have to turn up at nine!!!) It could all be over by 10.00 – second exclusion, Lou loses her job, they have to sell their house and boy murders new dog in frustration.

We are due to visit the psychiatric team tomorrow too for next stage of assessment.

Can’t believe Laurie went to sleep so calmly tonight. He is recalling bad dreams about school again and is very negative about going back…

It’ll all come out in the wash as they say…

To top it all – bloody new camera didn’t arrive yet due to easter hols… haven’t finished writing book stuff, have a work email with over 100 unread emails and am knackered.

on the bright side – we had a family day out at loch lomond which cheered us all up. everyone else in the house is fast asleep. laurie found some tiny mushrooms so I did a macro with my ‘old’ camera. I quite like it.

umbrellas in a rainy forest 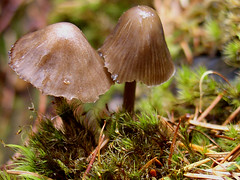 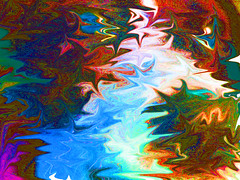