For the last year or so I have been working with Jisc colleagues and fellow consultants Helen Beetham and Tabetha Newman on a very large scale pilot of the Jisc discovery tool.

The discovery tool is part of the Jisc building digital capability service which has just launched as a new Jisc service. The whole service is aimed at supporting educational institutions in the UK to adopt an institution-wide approach to building the digital capabilities of staff and students. Subscribing organisations receive a suite of services and support to help them achieve this.

I have been involved in developing and managing content within the tool and working with Potential.ly (the platform developers) to adapt their existing personal development tool. The discovery tool offers a series of question sets for staff and students based on the elements of the Jisc digital capability framework. It also offers specialist question sets for those involved in teaching and for people working in library and learning resources centres. The tool is a self-reflective tool for individuals to use as part of their own self-development rather than a measure of their capabilities. 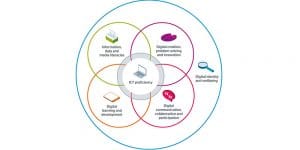 Once people complete their questions they are allocated a level based on their answers and are then given a fairly extensive report offering feedback for each of the elements covered by the questions. The feedback consists of a summary statement and next step bullets to help them develop their capabilities in that element if they want to. People are also offered sets of resources to find out more if they need to.

My work initially focused on collating resources and creating a content management system to allow proper curation and ongoing management. Each resource has a brief description and is indexed to the various elements in each question set. As well as being delivered links to resources and their descriptions in their reports, users can also browse the resources in each of the main areas covered in a series of resource banks. I wrote a blog post on the Digital capability blog about how the resources were selected.

As the pilot progressed I became involved in working on the question sets and led a review group made up of experts from further and higher education bodies to produce the library and learning resources questions set, feedback and resources.

Following an extensive evaluation of feedback from pilot institutions we decided to adjust the questions and during the summer I adapted all of the question sets in time for the launch in September.

I am now working with the Jisc team to support the service during the first six months and to ensure that content management systems are sustainable. I will be involved in writing guidance for service users and producing procedures, screencasts and training to make sure that content management can be done in-house. We are also working on a Welsh translation of the tool which is not mean feat because the question sets and feedback need to be worded very carefully.

Working on this project has been challenging and at times very intense in relation to timescales but the feedback about the tool has been encouraging and positive so far.