>Oh well – one step forward another step back. After the success on Monday we had a bit of a day yesterday. As we started walking to meet the school educational psychologist Laurie suddenly stopped walking and refused to move. We tried everything we could to get him moving. Tim even tried picking him up (kicking and screaming) and carrying him. The world watched on as we floundered in helplessness. I was stressing about being late for the appointment (yes I know – so anal but I hate being late). We did have a huge hilarious moment where we pretended to walk on in the hope that he would follow. Then we turned round and I’m yelling down the street that we’d be late and Laurie did a slow motion walk (very six million dollar man). He is so good at miming that we both broke down in hysterical laughter at this point. Just a release I guess.

God knows what everyone thought – mad family I’m sure.

Anyway in the end I went to the meeting and poor old Tim (total hero) struggled on for another half an hour. In the end they went back home – had a chat and a cuddle. I had a long talk with the ed psychologist about getting Laurie back to school. He was amazed that we’d got such a quick appointment at the family and child heath unit. He offered to help draw up a plan to ease Laurie back in gently – so not all bad. He seemed a bit more connected to the needs of Laurie this time.

When I got back Laurie gave me a huge love and said he was sorry. He was a bit subdued and we were all fairly emotionally knackered.

One of my freinds came round to visit (to talk about a book we are co-authoring and is due really soon!!!!!!) We all went for a walk in the park with Hector afterwards who has an keen eye for the girly dogs – soon to be dealt with; ) We let him off his lead for a big run and he came straight back – big relief. He’s clearly not the brightest spark in the box though as the day before he tried to leap out of our 2nd floor flat window! Tim caught him just in time and now all the windows are firmly shut.

Todays photo is called encircle the seasons (see the quote below) and represents the cycle of life – the hope of things turing around and an understanding that we will look back on this period and reflect on what we learned from it. We are already much stronger as a family unit. 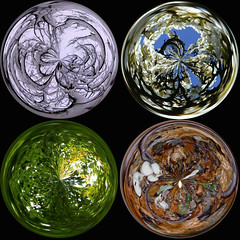 And is not time even as love is, undivided and paceless?
But if in you thought you must measure time into seasons, let each season encircle all the other seasons,
And let today embrace the past with remembrance and the future with longing.
Khalil Gibran