>feeling defeated tonight – in anticipation of an early morning meeting with the headmistress tomorrow. I know she’ll patronise me and make me feel like shit.

I was supposed to meet with the educational psychologist attached to the school today but he put me off till next week. That will leave me exactly one week to sort out some type of educational support for my son. Either that or I get arrested, or have to lose my job and my home.

I rang the Education Authority for Glasgow and got no help. Apparently the only person who can help me find an alternative school is the ….wait for it…. educational psychologist. When I rang him and asked if he could suggest a school he said the one we were at was one of the best. Hey Ho where do we go….

Tomorrow I’m going to ask if they will let my son avoid the nightmare playground and lunchtime events. If they can excuse him from the gym because of the noise. I’ll ask if he can be excused from group working which he finds so challenging and if he can wear ear plugs to block out the sounds that ‘hurt’. Well I wonder what they’ll say to that. Of couse I’m just a liberal parent who doesn’t exhert any discipline of my child. Strange that given that he is a stickler for rules and gets very upset when people don’t adhere.

Still I had a bright spot on my horizon today. The health authority came through trumps. I rang up to chase my referral from the GP to child and family psychiatric unit and found that they were faxing it through as urgent to be considered in todays round of cases. I don’t know what priority they gave it but at least I know that someone, somewhere is thinking about the welfare of my son.

Also it was Tim’s birthday and Laurie gave him a card saying ‘ no. 1 dad – you truly are the best’. So true…

We are so lucky…

This one is called Goldfish from a set called A different view – all taken by Laurie to show his perspective. This one represents us as a family swimming in one direction (against the tide) but strong and true… This one is for the health authority. 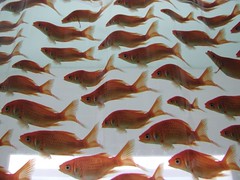 Stanley the dog is not here yet – kennel cough so he has to go to the vet on Fiday. we hope to pick him up on Saturday. hope he’s good at swimming….