>I started using flickr.com a week ago and my life has changed…

It has prompted me to finally get a blog started.

I also need a blog to record some reflections on elearning for an online course that I’m doing with Oxford Brookes University.

It is about time I did it as I’ve been banging on for some time now about how ‘social software’ is the key to enhancing elearning – as opposed to the ‘lets put all our content on a VLE approach’. I’ve also made students do blogs to reflect on their learning so it’s only fair that I should too.

So it’s official – I’m part of a huge community of bloggers, and a huge community of people who want to put their photos on Flickr. Within Flickr I’m part of several smaller communities who have something in common. I like the Utata group as it acts as a salon in the traditional sense where people talk, play, experiment and learn. The Photodominos group is great as they post photos that connect with each other in some way – with some really interesting interpretations.

Have a look at my photos.

Here is a photo that I took at 3.00am this morning in Glasgow after a massive and sudden snowfall – that’s how bad my addiction is…

It is called rear window and has been added to two film related photo pools – Dial H for Hitchcock and Let’s talk film! 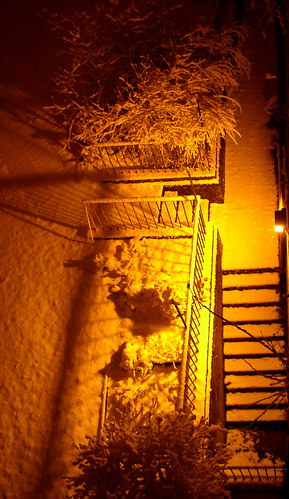